Update on AURP White Paper: Congress Makes Down Payment (But a Bit Short) On CHIPS and Science Act 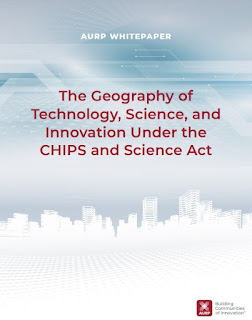 Eight days after AURP released its report, The Geography of Technology, Science, and Innovation Under the CHIPS and Science Act, Congress passed, and the President signed (on December 29, 2022), the $1.7 trillion Omnibus Appropriations Act to fund the federal government for federal fiscal year 2023 and some supplemental funds.
Included in the funding were several programs authorized under the CHIPS and Science Act, but not at the levels envisioned.

The National Science Foundation would see its largest one-year funding increase, including a $1 billion boost from fiscal 2022 numbers.

The CHIPS and Science Act had an authorized funding level of $8.9 billion.

Congress, through supplemental funding, added an additional $1.8 billion to implement the CHIPS and Science Act, including $980 million for agencies, plus $335 million for NSF.

The U.S. Economic Development Administration (EDA) received $500 million in funding for regional technology and innovation hubs and $50 million for its Build to Scale program.

The programs envisioned in the science portion of the CHIPS and Science Act did not receive their suggested funding levels, and progress in the first year of these authorizations is critical. The regional strategies outlined in the AURP report remain relevant - and communities need to anticipate funding opportunities in 2023 and work with local Congressional delegations to begin to support funding for FY 2024.

Your 2023 New Year’s Resolution: Join with your peers building communities of innovation across the U.S. by becoming a member of AURP, plus support SSTI’s Innovation Advocacy Council, which is a driver of federal place-based economic development policy and funding.