Last year I wrote about the Endless Frontier Act and its $100 billion proposal to infuse the NSF with new funding and a new Technology Directorate. AURP CEO blog:
https://aurpceo.blogspot.com/2020/10/endless-frontier-act.html
Since then, the Endless Frontier Act has been folded into the U.S. Innovation and Competition Act (US ICA) by the US Senate, establishing a new horizon for applied research funding opportunities, and creating the promised NSF Technology Directorate. The scope of NSF authorized funding for the next 5 years, however, has been pulled back to accommodate more funding for Department of Energy National Labs, a disappointment for those seeking more resources for NSF.
On a separate track, the House just approved a set of initiatives for NSF that are not as sweeping as the Senate approach. How these two versions of NSF authorization will be accommodated will be decided in Congressional conference sometime in the summer or fall.
The budget submitted to Congress by the Biden Administration to increase NIH funding by $9 billion includes $6.5 billion of funding earmarked to create the Advanced Research Projects Agency-Health (ARPA-H), modeled after DARPA, to promote new technologies in cancer research, diabetes, and Alzheimer’s disease. Similar increases for initiatives in advanced manufacturing and technology hubs are included in both new Congressional authorizations and Biden budget plans.
We will provide a legislative and funding update in October at the AURP International Conference in Salt Lake, hosted by the University of Utah Research Park, Oct. 18-21, 2021, so make plans to attend. https://international.aurp.net
Meanwhile, whatever happens with the Congressional conference committee and the Biden budget later this year, it is clear an unprecedented set of new applied research programs, innovation clusters and technology hubs are in the offing for universities, hospitals, communities, and regions to take advantage of.  Also important is the fact that there is a push, particularly in the Senate, to see that these funds and hubs are spread out across the country, and not concentrated in places like Boston and Silicon Valley.
What should universities, regions or states be doing now to anticipate these opportunities?  Here are some strategies:
Does your region have a CEDS (Comprehensive Economic Development Strategy), and have your read it?
The US Economic Development Administration (EDA) may be put in charge of a competition for developing technology hubs across the U.S. CEDS are regional economic development strategies and are often necessary components to an application for funding from the EDA. If you have a CEDS, great. Read it and see how your institution might play in an EDA solicitation for a technology hub in your region. If you do not have one, you should be pushing your region to develop one.  https://www.eda.gov/ceds/
What EDA region are you in?
The competition for technology hubs may be linked to different EDA regions, such as having a limitation of number of hubs per EDA region or other factors. It is important to note that some EDA regions have many universities, such as the Philadelphia region, which includes Boston, NY, Philadelphia, Baltimore, and DC area.
EDA Regions

Are you an EPSCOR (Established Program to Stimulate Cooperative Research) state (or near one)?
EPSCOR is a program that NSF and several other agencies use to fund areas in the US that historically receive less financial support through federal R and d funding. The goal of EPSCOR is to create long term partnerships among universities, industry, and federal labs. Provisions in the U.S. ICA would dramatically increase NSF funding for EPSCOR states, by some estimates up to 10 times as much as is currently allocated.
A related provision allows funding to go to projects that take place in other non-EPCSCOR states as long as the initial funding is to an EPSCOR state. Accordingly, non-EPSCOR states, might strategize how to work with adjacent EPSCOR states on applied research hubs or projects. Maryland with Delaware, or Utah with Nevada, and Texas with New Mexico, for example. The House version does not have a parallel provision on increasing funding for EPSCOR states so unclear if this will survive conference committee.
EPSCOR states in blue 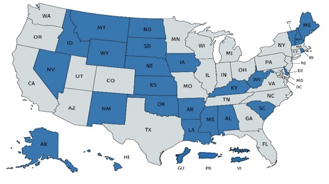 Which entities win federal funding in your state?
Examining which institutions in your state—private sector, fed labs, or universities—are the predominant winners of federal funding is a good first step in developing a strategy.  Fortunately, our friends at the State Science and Technology Institute (SSTI) have provided an excellent summary of state profiles that can help in developing a strategy.
Private industry in Connecticut for example wins quite a bit of federal research funding in that state. In Maryland, the presence of federal labs, like NIH, skew the funding towards internal federal lab research. In Nebraska, most of the federal research is done by universities.   (SSTI is having its annual conference in Little Rock in November. https://2020.ssticonference.org/) 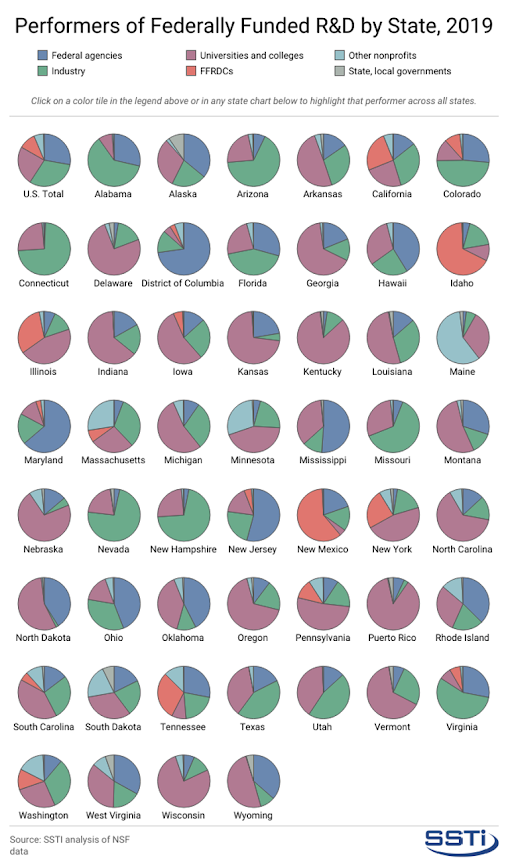 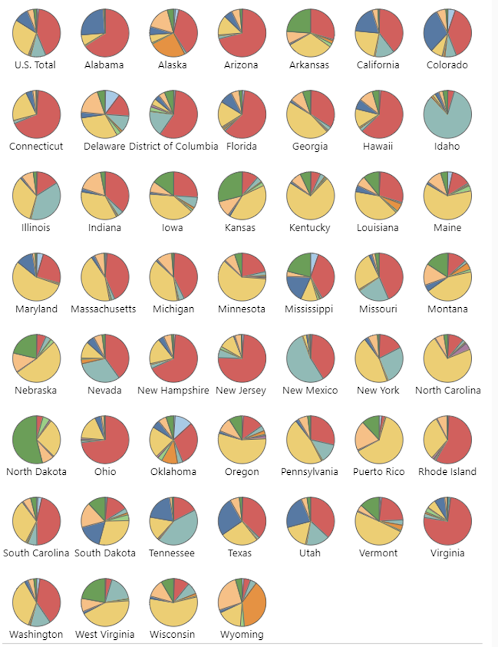 Does your state or region have an HBCU or a Minority Serving Institution (MSI) or do you have research relationships with these institutions?
Historically Black Colleges and Universities (HBCU) and Minority Serving Institutions (MSI) are places producing both research opportunities and diverse STEM graduates.  There are many provisions in the various funding programs in both House and Senate bills encouraging research work at HBCUs and MSIs.
While HBCUs are better known, not everyone knows which colleges and universities qualify for MSI status and which do not. Here are some links:
Does your state have a manufacturing sector?
Other elements in USICA:
Funding for tech transfer, regional tech hubs, and tech test beds are other new initiatives in USICA.
---------------------------------------------------------------------------------------------------------------------------------
Two additional federal policy initiatives that can support more tech based economic development and university partnerships across the country:
Reforming Federal Rules on Corporate-Sponsored Research at Tax-Exempt University Facilities
Authors: Brian Darmody & Bill Bates
Improving university/corporate research partnerships is key to advancing US competitiveness. Reform of the IRS rules surrounding corporate sponsored research taking place in university facilities funded by tax-exempt bonds has long been sought by the higher education community and will stimulate more public-private partnerships. With Congress considering new ways to fund research through a new NSF Technology Directorate and the possibility of a large infrastructure package, an opportunity is now open for Congress to address these long-standing reforms in IRS rules.
https://www.dayoneproject.org/post/reforming-federal-rules-on-corporate-sponsored-research-at-tax-exempt-university-facilities
The “FASTER” Act for the Federal Laboratory System
Authors: Brian Darmody & Rich Bendis
The federal lab system is an enormous, $50 billion-plus enterprise of internal research and development (R&D) across the United States. As governments around the world, including China, pour billions of dollars into advanced technologies, it is imperative that we use our nation’s federal lab ecosystem as effectively as possible.
However, because federal labs have varying legal authorities, missions, and cultures, their records of local economic engagement and technology commercialization vary considerably. Universities, by contrast, have demonstrated a strong record of supporting regional innovation ecosystems through use of place (creating incubators, research parks, and adjacent innovation districts), talent (allowing university researchers to be involved with private-sector technology under approved and managed relationships), and innovation (using intermediary university foundations to take on business aspects of technology commercialization).
The Federal Authority for Science, Technology, Entrepreneurship, and Research (FASTER) Federal Labs Act will make it possible for all federal labs to use the tried-and-true tools that universities use for economic engagement and technology commercialization. The FASTER Federal Labs Act will do this by: (i) allowing surplus federal land to be used for public-private partnership facilities, (ii) creating clearer pathways for federal researchers to work with startup companies, and (iii) authorizing a federally charted tech-transfer organization based on models established at leading research universities. The FASTER Federal Labs Act will not require significant outlay of federal appropriations as many of its provisions simply give federal labs greater discretion over deployment of existing resources. The Act can be implemented relatively easily as an add-on to legislation expected to be considered by this Congress.
https://www.dayoneproject.org/post/the-faster-act-for-the-federal-laboratory-system
The premise to spread more breakthrough science and technology across the U.S. that is evident in USICA was spurred in part by the book Jump-Starting America by Jonathan Gruber and Simon Johnson. 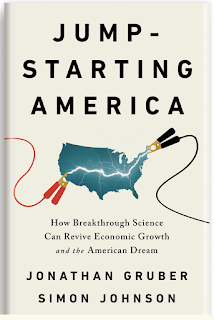 We are pleased to announce that Jonathan Gruber will speak at AURP’s International Conference in Salt Lake City on Oct 21, 2021. And as mentioned, earlier in the conference we will have an update on US ICA, other R and D initiatives and tech funding in the federal budget.
Join us in Salt Lake, Oct. 18-21, 2021, to meet your peers and learn how to take advantage of these unprecedented research and tech opportunities for universities, regions, and states across the U.S.
https://international.aurp.net/